Encouraging Creativity at the Comics Festival

Every passing months brings us closer to the 4th San Pablo Comics Festival! To those curious, yes, it's a 100% go! We will be opening slots for exhibitors very soon, but first, we need to talk about something if you are interested in participating.

One of the big goals of the festival is to encourage creativity and originality among artists. We want you to create your own characters. We want you to have that experience of creating something of your own and pushing it so that it becomes a source of income.

We will be enforcing this rule rather strictly and we will be assigning people to check on your merch regularly. If you bring merch to sell that are copyrighted, we would require the proper paperwork that proves you are legally allowed to do so. We're sorry if this causes a problem for you, but all of us who organize the Festival are one in encouraging people to respect intellectual property. By this we respect everyone's intellectual property, specially yours.

If this is a rule that you cannot, in your own good conscience abide with, we would suggest you no longer participate to prevent any future problems, and just join the 99% other events that allow the use of copyrighted characters.
Posted by Gerry Alanguilan at 7:40 AM No comments: 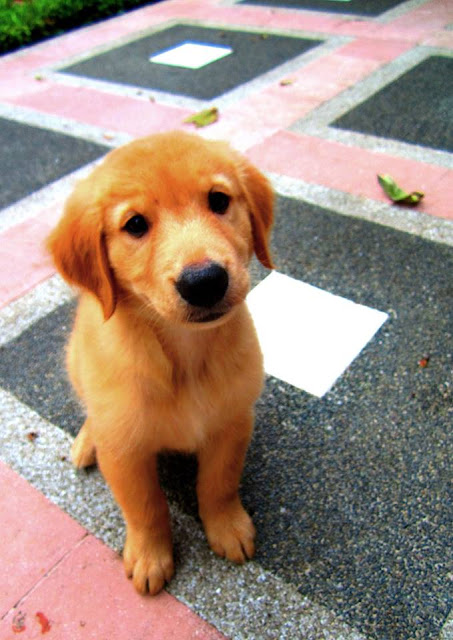 
Posted by Gerry Alanguilan at 12:50 AM No comments:

Yesterday started out OK. I expected nothing more except the usual when I went in for my regular session at the hospital. But for some reason, things were different. As soon as I got home, I was vomiting. And I was vomiting for the next few hours. I couldn't stand up and I couldn't eat (I'll just lose it anyway). I ended up not eating that night at all. I slept all night and woke up when it was already light out. I had breakfast because thank goodness I was finally hungry and no longer felt like throwing up. But then after breakfast I was asleep again until they woke me up for lunch. I guess my body was just so exhausted it took that long to recover. I spent the rest of the afternoon resting some more. I hope to go back to work very soon.

It's that time of year when I receive several requests from students to interview me as a resource person for their thesis. I find it hard to accommodate them all so I just end up agreeing to only one. As to who I choose really depends on how they talk to me. Those who give deadlines I immediately give a pass. Only primary work clients can give me deadlines. I'm sorry, but students asking for interviews can't. There's a primal reaction when they give deadlines like I have to accommodate them within the week, just like that, as if I'm just hanging out the house doing nothing and have nothing scheduled. It just gets my goat.

Although I've learned to say no a lot, it never gets easy. So although it's kind of bad of me, I often end up just not replying at all to most requests.

I'm sure there are former students out there who still carry a bit of a grudge against me for not responding, or for stopping to respond after they gave me deadlines. I really just have to get those things out of my mind. Work will always be my priority and everything else would just have to give way. If interviews, meet ups, etc., get in the way of work, work will always win out.
Posted by Gerry Alanguilan at 12:45 AM No comments: 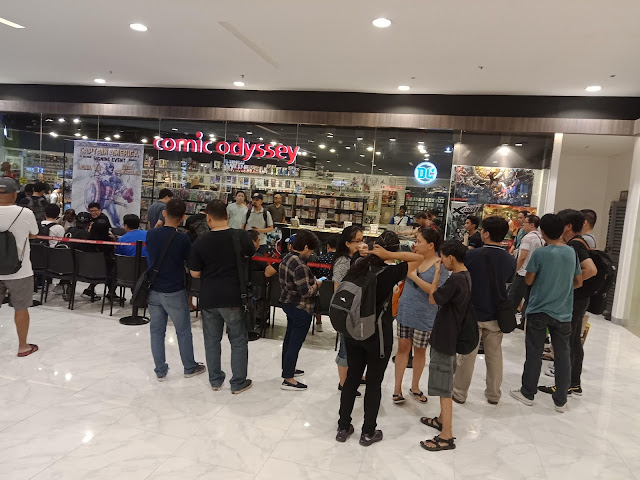 Leinil and I agreed that it was one of the most attended signings we've ever had. It really makes me feel glad to see so many people turn up including a lot of my friends in comics, regular readers who have supported us for years and new people picking up comics for the first time! Comic Odyssey owner Sandy told me that their location is a pretty good one as it attracts a lot of new walk in customers. New fans of comics! I think all of us in the industry need that, creators and readers alike. New blood is what we need to keep comics going.

The location is one of the things that impressed me about the new store. A large in front assures mall walkers a huge and sudden view that showcases the entire store in one look. And it's quite an impressive look. Even if I wasn't a comic book fan, I'll check it out. I think I'll find myself going here every time I go to Manila. It's always nice anyway, visiting with Sandy, Rowena and the rest of the Comic Odyssey crew.

Every trip to Manila, Ilyn and I always look forward to new places to eat. We had lunch at Botejyu, just one of the many specialty Japanese restaurants popping up all over. It seems Japanese is the hot thing right now. This particular resto's specialty is Yakisoba. So I tried it. I didn't like it. So many flavors in one plate that it was overwhelming. The much expected Japanese quality of simplicity simply went out the window. Ilyn liked her Tempura though. But Tempura is always awesome.

We had dinner at Pho Hoa. I had proper Beef Pho for the first time with all the herbs and things and it was a very interesting experience. The broth had an intense flavor, probably due to the combination of mint and coriander leaves, and the beef was really really good. I really liked it.

It was nice hanging out with Rowena and Leinil during dinner. We had a chance to talk of a lot of things, mostly not comic book related. Of course we talked about Sandy a lot, because you always talk about that one person who isn't there. Sandy's in the States with comics business. I hope he remembers to pick up some of those 100 page DC giants at Walmart for me.

We got home at around 9:30pm which isn't too bad. I didn't sleep right away because I still had to approve all the tags from the signing. And there were a lot! Thanks to everyone who uploaded photos! We weren't able to take much photos ourselves.

Posted by Gerry Alanguilan at 1:55 AM No comments:

I really don't go to Manila much anymore. I admit, it's gotten quite physically difficult for me to do so, and every time it's a great expense because we always have to rent a van. Commuting via bus is now simply out of the question. I feel bad because I miss so many events I would otherwise would like to attend. I'd like to attend more Komikons and Komikets and so forth. But right now I can only go the the November Komikon, and that's it.

But tomorrow is an exception. Comic Odyssey has released our newest high profile book, Captain America #1 with Ta-Nehisi Coates and Leinil Yu, which I am inking. It's actually kind of a big deal. Sandy of Comic Odyssey has scheduled a signing for us tomorrow at Robinson's Galleria at one in the afternoon. It's been almost a year since I did one of these signings for CO. I actually kind of missed it. It's always nice to see Sandy and Rowena and all the CO staff. It's always nice to see my old buddy Leinil and that big bunch of regular readers I see so often at things like this.

My walking hasn't really improved or degraded in the last couple of years, but I've taken to use a wheelchair whenever I go up and about at malls, just so I can conserve my energy. I can still walk, but the pain in my knees makes me tired so quickly. With the wheelchair, I don't have to get so tired. I'm really bummed about it. For many years I've walked so far and so long that I've taken it for granted. I wish I could walk normally again. I've started doing some exercises to first ease the pain in the knees and after a while, I hope it becomes a permanent cure. Fingers crossed!
Posted by Gerry Alanguilan at 7:09 PM No comments: