Axis, Komikon and Other Things

It’s been a very difficult couple of months for me, physically. I caught pneumonia late last month and as I recounted in my last blog entry, it was truly horrible. After I wrote that blog entry I thought it was all over, but much to my dismay, it took far longer to recover than I realized. It became so bad it affected my schedule for inking Axis. Although I still inked more than half of issue #8, I have to thank Jason Paz for stepping in to help, and specially to Leinil Yu, who has been very understanding of my situation and gave me as much room as he could. Leinil tells me that we won’t be working on anything new until January so that comes as a huge relief for me because I truly need the break.


I wasn’t feeling so good the day before Komikon that I seriously considered not going and just let Ilyn and Zara take care of the table. I was still furiously working on Axis at the time and there were still a couple of pages to do. I decided to go anyway because my printer ink ran out and I had to get some from Manila. It turned out to be an incredible Komikon. 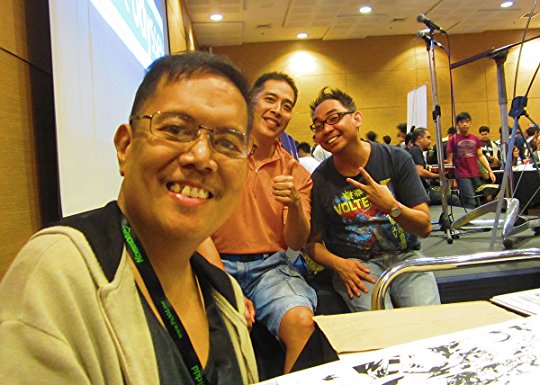 My doctor has advised me not to go to crowded places and if I did, I needed to wear a face mask. I didn’t wear a face mask, at least for most of Komikon. I just decided not to shake hands with anybody and just stay at my table and not wander around. I hope I didn’t offend anybody by doing so. It just couldn’t be avoided. I asked my friend Danry Ocampo to wander around for me instead and buy me comics. There were a few new potentially good titles that came out that day that I just had to get. So thanks Danry! I haven’t gotten a chance to read anything much yet except for Manix Abrera’s “14” which was fun and interesting. Oh yeah, JP Palabon’s “Pera” was also hysterical.

My childhood friend Dan Yatco came to Komikon to visit me (dude on the left at the photo above). We’ve been friends since Grade 6 (Grade 7 for him because I’m accelerated hehe). We were also friends and classmates in High School and then again in college. It was me who actually convinced him to take up Architecture because I couldn’t bear to go to a new university by myself. I don’t think he’s particularly interested in comics, but he reads them and goes to these events because of me and that’s really touching. Sometimes there are friends you make for life.

Now I feel much better and I probably will be able to do some bit of work. There is another thing I have to do for Graphic Classics that has also been delayed because of my illness. I can probably start doing that again soon. I’ll most likely take it easy and ease myself in, maybe just a few hours at a time in a day.
Posted by Gerry Alanguilan at 7:12 PM No comments:

The last two weeks were just horrible. It started out as a cough that just won’t go away. I couldn’t sleep for all the coughing. And then I got fever. And colds. And the coughing got so bad that it started to disturb me in a way it had never done before. I had my x-rays taken and went to the hospital. It turns out I had pneumonia. Holy shit. I guess that explained it. I was flat on my back for two weeks on antibiotics, nebulizing three times a day. Today I’m feeling much better, but I felt terrible that I never had the chance to work at all the last two weeks. I suppose I needed the rest, but no I have to really catch up. I have lots of work to do. That’s what I’m thinking now. I’m voice is still rough from all the coughing torture I went through, but it’s recovering too.

I was told that pneumonia could kill. And it was really frightening knowing that a week ago while I was in the thick of it. There were moments when I swear I started considering giving all Ilyn all of my passwords. You can guess what that means. I’m glad that moment passed. It’s still too early for me. So much stuff yet to do.
Posted by Gerry Alanguilan at 7:17 PM No comments: