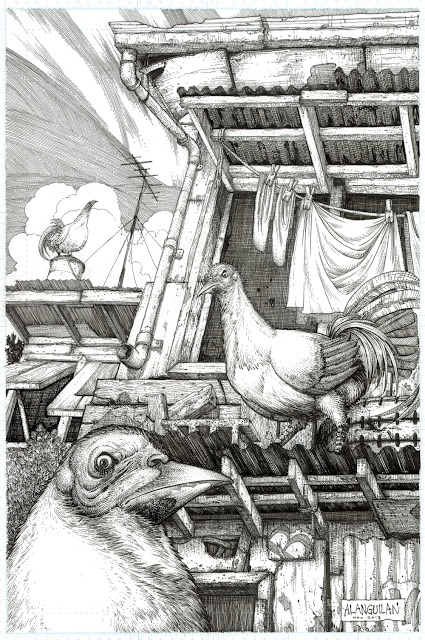 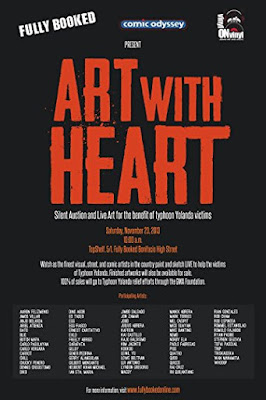 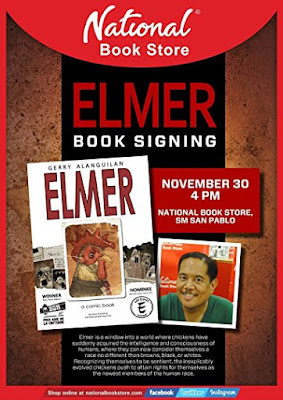 After “Art With Heart”, I’m afraid I will no longer be able to accept commissions for the time being. It really does take a lot of time, and I have a lot of comics to write and draw. A publisher has practically commissioned me to create a whole book so that will pretty much take over all my free time outside of my Marvel work. Sorry guys!
Posted by Gerry Alanguilan at 7:13 AM No comments:

There will be another fundraising event this coming Saturday, November 23, 2013 at Comic Odyssey on the fourth floor of Fully Booked, Bonifacio High Street in Taguig. This time, all proceeds will be donated exclusively for the benefit of typhoon Yolanda victims.

It will be a sketching event where more than FIFTY artists are confirmed to participate! Event starts at 10am. Confirmed guests include:

I will be offering another ELMER illustration for auction. I’ll be posting the page here and update this post when I finish it.
Posted by Gerry Alanguilan at 7:23 AM No comments: 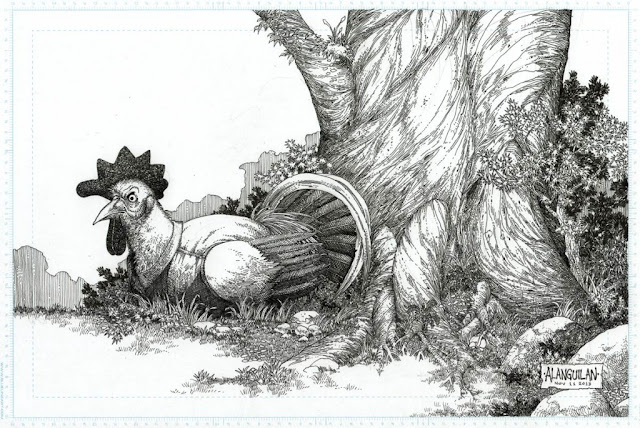 The Komikero Artists group would like to make an announcement with regards to fundraising efforts through auctions at this Saturday’s Komikon. We planned these fundraising event a few months ago, initially to benefit our fellow Komikero in need, Vergil Espinosa for his medical needs. Then the earthquake in Bohol happened, and Lui Antonio contacted our group if we could help raise funds for that calamity as well. We agreed.

We will continue with our fund raising efforts for Bohol Earthquake victims as well as for Vergil at this coming Komikon.

We are fully aware of the great and unimaginable tragedy that has befallen our country within the last week due to Typhoon Yolanda. We understand that many of you would wish to help those victims as well. Please do not worry as we will have plenty of opportunity to do so. For this Saturday, we do wish to go ahead and raise funds for our original recipients: Bohol and Vergil, as this is what we have already promised to do.

There are now plans to have another fund raising specifically for Typhoon Yolanda victims. Since it is still currently being organized, we cannot share more info about it, but rest assured it is being put together will all due haste as we understand that the need is great and immediate.

Thank you for your understanding.

*The above ELMER illustration is one I will donate to benefit Vergil Espinosa specifically. It’s pen and ink on 11″x17″ art board.

If you wish to bid right now, please send a PM to the gallery owner, Johnny Danganan. This will be a silent online auction, which will continue at Komikon until 5:30pm. Please contact Johnny for details.
Posted by Gerry Alanguilan at 7:24 AM No comments: 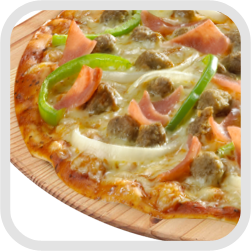 Before anything else, let me just say this is not intended as an ad for Shakey’s Pizza, although people are free to believe that it is. But it’s simply not my intent. I just want to talk about Manager’s Choice, because well, it’s my favorite pizza and it’s got a bit of a sentimental value to me.

Anyway, let me just say that the first time I ate pizza… I don’t remember when this was (I was probably 8)…. I HATED it. It seemed too sour for my taste. It just didn’t really agree with me. But by the late 70′s and early 80′s we started seeing Shakey’s Pizza ads on TV and marveled at how the cheese would stretch out like rubber bands. We were living in San Pablo City, but we decided that the next time we go on one of our monthly supply trips to Manila, we’d eat at Shakey’s. We just had to know what that pizza tasted like!

The time came to go to Manila and I remember being very excited. Not just about the pizza but any trip to Manila is something to be excited about. To be honest, I was more excited about looking for new toys and new comics at National Book Store. There was a branch of Shakey’s at what is now Greenbelt. It was a freestanding building back then. In fact, the place was designed to look like a big house.

Dad ordered the “Manager’s Choice” pizza because well, at the time he was a branch manager of the Bank of the Philippine Islands so of course he just had to order the Manager’s Choice. It was kind of a really small inside joke.

As was usual with restaurants like this, drinks are usually served first, long before the pizza arrived. I think it’s a gimmick of course, because by the time the pizza does arrive, your drinks will be gone and you just HAVE to order another round. I would usually order root beer because well, it had “beer” in it and the child in me was feeling a little rebellious. Another small inside joke. Very small. So of course my root beer would be all out by the time I bite into my first slice. But my dad would refuse another round of soda so we had to settle for water. I remember being very frustrated.

As it turned out, I loved the pizza. I loved it so much I wanted to eat more of it. But since we were four people (my dad, mom, my brother and me) dividing one pizza, I think I had only 2 slices at the most. I wanted more but well, we couldn’t order another one, so once again, I was frustrated. In Tagalog there is a term that one uses: BITIN. I couldn’t wait for another trip to Manila so we can have pizza again, although it wasn’t a guarantee that we’d have pizza even if we do return.

So for years, it was kind of a point of frustration for me. But I did enjoy the many times we did go to Shakey’s. I was just BITIN every single time.

Fast forward to 1993. I had a job at an Architectural firm. My girlfriend had just broken up with me. So I was feeling really down. On the way home along Recto Avenue in Manila there’s this branch of Booksale and I scoured their stocks for cheap comics. I bought a few including an issue of Marvel Age with this awesome Jim Lee Punisher drawing. I remember being very awed by that drawing. I then went to a Shakey’s nearby, ordered a large Manager’s Choice and a pitcher of draft beer, and started drowning my sorrows in pizza, beer and comics. It never even occurred to me I wasn’t BITIN anymore because I could have as much pizza as I liked, and I could drink as much beer as I liked. I went home drunk, but trying very hard not to look like I was drunk. I did this solo binge at Shakey’s several times over the next year or so.

Fast forward to 2013. I’m married now and I’ve got a job in comics. The other week I took my parents for dinner at a Shakey’s branch here in San Pablo. Of course we had the Manager’s Choice as usual, plus a Vegetarian one because you know, at our age we have to cut down on meat. Shakey’s no longer serves draft beer but I don’t miss it. I just ordered water. Of course, this time around I pay for it.

Nobody is BITIN this time around.
Posted by Gerry Alanguilan at 7:27 AM No comments: