It's been really bugging me that my online comics museum website has gone down, taking with it all previously uploaded material. And I believe it to be thousands of images from the Golden age of komiks. It was a good resource. I want to bring that resource back. 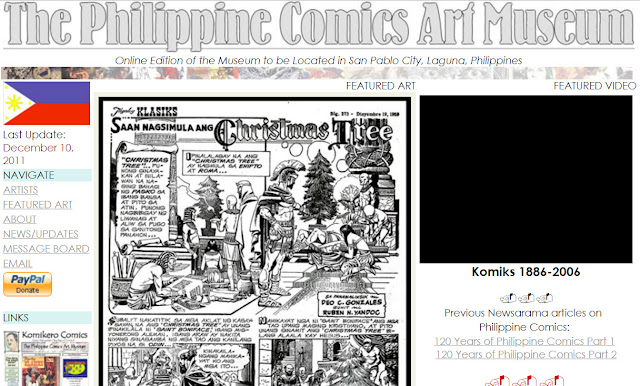 To psyche me up for this, I went ahead and bought some space online and bought the domain http://www.komiksmuseum.com

It's short and easy to remember. Nothing's there yet, but I've slowly begun rebuilding it. I'll be redesigning the site completely, but I will also use much of the material I uploaded before.

There will be two major differences between the old museum and the new. This new online komiks museum will emphasize on both artists and writers, and I will now be including work by what I consider to be Modern Age creators and Independent Creators.

To simplify things, I would consider Golden Age creator as anyone from the pioneering days of komiks to someone like Lan Medina. Modern Age creator starts with someone like Rafael Kayanan and onwards. Independent Age creator includes anyone who has self published their comics from the early 1990s and onwards. There would definitely be an overlap of Modern Age and Independent Age as they started roughly at the same time and are existing concurrently.
Posted by Gerry Alanguilan at 1:21 AM No comments: