... and I really don't have a whole lot to say. I wanted to write on this blog since the last entry, but I just couldn't find anything of interest to me to talk about. There has been a bit of fuss about my health when my dad posted my need for a blood transfusion which he made it to look worse than it actually was. Naturally, some of my friends panicked and started messaging us. Times like this you get to know who your real friends are and it's quite touching. Thanks to everyone who posted messages of support and specially to those who donated blood. Your blood is now coursing through my veins, animating this fat bony ass. I really appreciate it.

I'm back to work inking Phoenix. I have a deadline next week, which shouldn't be a problem. It's been really cold lately though, so lying down in bed has been quite appealing and tempting. I guess I'll be working through Christmas, which isn't really a problem for me. I've worked during Christmas so many times before.  A holiday is just a normal working day for me.
Posted by Gerry Alanguilan at 10:08 PM No comments:

I wasn't really hiding it. I just didn't want to talk about it. But since my health issues had been apparent during the last few Komikon events, I just might as well talk about it here. Although these health issues are now a constant part of my life, I've learned to deal with it, and continued to work and be productive in spite of it. 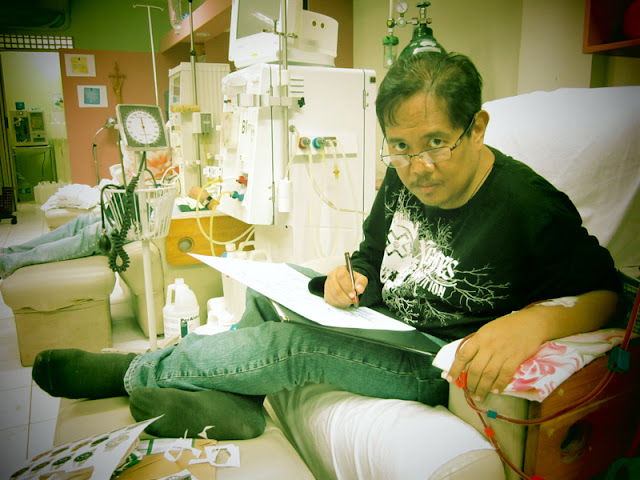 In the early 2000s I developed kidney problems and I have been undergoing dialysis ever since 2011. At first I went in twice a week, but I've since gone in for three times a week, four hours each session. Outside of the 15 hours I spend in the hospital (SPC Medical here in San Pablo City), I go about my life quite normally, although I've had to severely adjust my diet and liquid intake.

But I've managed to work consistently all throughout this. I did blow one or two deadlines, but I've pretty much finished what was asked of me and on time. In the time since I started dialysis, I've inked things like Superior, Supercrooks, Indestructible Hulk, Avengers, Axis, Civil War, Inhumans Vs. X-men, Darth Vader Annual, Star Wars, Monsters Unleashed and Phoenix Resurrection. I was also able to come up with Rodski Patotski: Ang Dalagang Baby, Bakokak and the re-release of Elmer and Wasted. And I'm currently working on other new books.

And since that time I was able to go to Algeria, Paris, Singapore, Cebu, and Iloilo without much problems. All I had to do was schedule dialysis sessions in the locality if I'm staying for more than 3 days.

I was also able to fulfill a dream of putting up a live museum located here in San Pablo City, and I'm currently organizing a new San Pablo Comics Festival for January 2019. 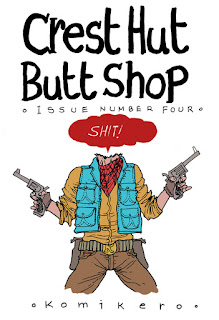 I've also developed knee problems which is totally unrelated to my kidney problems, that's why I go around in a cane most of the time. My face mask and me avoiding handshakes may or may not be related to my kidney problem. But I'm currently taking some kind of medicine to help my body produce blood, but it also has the unfortunate side effect of making me vulnerable to disease.

These health issues are the reason why I most often decline invitations of any sort for talks, conventions etc., because they do take quite a lot out of me. I decided to just concentrate on Komikon, but even that might be out of the picture soon. I would just much rather conserve all my energy to continue with my work here at home. I have a much better chance of doing my job well if I didn't have to go all around the place that just zaps my energy so much.

Right now I'm in a comfortable place. I found the perfect balance in my diet. And I can work in relative peace and quiet.

I had felt much comfortable talking about these things in comic book form. I put down my experience in dealing with this issue in Crest Hut Butt Shop #4. If you want to get a copy, just let me know.

I've seen a lot of death in the clinic. People I had gotten to know would just suddenly waste away and die. Someone who I had known for years was yesterday fighting for his life. A lot of these people, once they were on dialysis, just give up, like their lives are over. I wish I could tell them it isn't. That it's a new lease on life. As long as they're good about their diet, and more importantly, regulate the amount of liquid they take, they can live good, comfortable, even productive lives. But a lot of people are just bullheaded. I'll eat what I want! I'll eat what I want! They only think about themselves, and never about those people who stand patiently with them and take care of them.

The last thing I want is for my loved ones to feel relief and be actually happy once I'm gone. That would just be heartbreaking. I don't want to make their lives difficult by just being good to myself and my body and do everything my doctor says.

And of course... much much thanks to my wife Ilyn who stood by me, literally through thick and thin and through sickness and health. She's been a rock, supporting me, keeping me alive spiritually and emotionally. Without her, I wouldn't be here anymore.

Posted by Gerry Alanguilan at 12:53 PM No comments: