The December issue of Rogue Magazine carries with it a one page comic strip depicting a short history of Philippine Comics. In it, the writer asserts that Carlo J. Caparas was responsible for the rise of independent comics like my Elmer and Carlo Vergara’s ZsaZsa Zaturnnah.

This is absolutely, any utterly UNTRUE.

Carlo J. Caparas had NOTHING to do with the rise of the Philippine Independent Komiks Industry. NOTHING AT ALL. I don’t know where this writer even got this idea because it is just absolutely RIDICULOUS.

To further validate this, I’ve started to put together, with the help of the many independent komiks creators stretching back to 1993, a comprehensive timeline of significant events and publishing history of the new Pinoy Komiks, where one can see clearly this was all happening without Carlo J. Caparas.

The main purpose of the timeline however, aside from setting the record straight, is to document and archive and to fully cement in history, the accomplishments of modern day Filipino komiks creators.

If you are a Filipino komiks creator who have published comics here in the Philippines from 1993 onward, please send me an email at gerryalanguilan at yahoo dot com with the subject line “Komiks Timeline”. Please include the Title, Date of Publication, Publisher and list of creators.

I will be posting this timeline sometime early December.

Here is the response from Rogue Magazine:
http://www.facebook.com/notes/rogue-magazine/a-letter-from-budjette-tan-on-pinoy-komiks/10151101256362109

I applaud Budjette’s efforts to reach out to Rogue, and while it’s good that we got some kind of response, I feel it’s not good enough. Hopefully, there will be an erratum in the next issue.
Posted by Gerry Alanguilan at 12:04 AM No comments:

“Komiks Is Dead” is a DEAD Issue (UPDATED)

An article I wrote came out in the Philippine Daily Inquirer not too long ago. I will be posting the complete unedited article after my post below. I almost declined writing the article because I was too busy, but I immediately realized the opportunity to talk positively about the state of Philippine comics.

TWENTY YEARS into the life of the Philippine Independent Comics Industry, I would think it would be ridiculous if there were still clueless people around thinking komiks was dead. I mean, really? This is a debate that has raged in various forums, message boards and blogs over the last 10 years, but I think time has proven that it has never really died. That Komiks is very much alive. To me that debate is over. Komiks IS alive. Everyone should really just accept that as a fact, because it IS a fact.

If anyone else wants to waste time and saliva to debate that, well, you can do that on your own because I, and a ton of other folks are MOVING ON. Talk to the fucking wall till you are blue in the face. As far as I’m concerned, anyone who wants to waste time talking about that has got nothing of substance and nothing of importance at all to say to me. And I will not waste a single minute (apart from writing this blog entry) of my precious creative time debating something that is completely and utterly moot. If I did, I’ll just be depriving myself of time in creating MORE COMIC BOOKS.

I think anyone who even says Komiks is dead today is, I’m sure, completely aware of the truth, malamang nangaasar na lang. Or maybe they’re just absolutely ignorant and clueless. Maybe even Bitter Ocampo? Who knows? I really don’t care. They’re now all in my ignore list.

Anyone creating comics, and anyone who is a reader of our comics don’t even have to think about this. Right now we’re just more concerned about creating better comics, and finding more ways to get our comic books into the hands of readers.

So yeah, let’s just not waste anymore time engaging these people guys. It’s just a waste of time. Let’s just do our comics!

As to why I even bother posting about this at all if I say I just want to ignore and say I don’t care… well, I guess just I’m the kind of person who wants these people to know WHY I’m ignoring them. Telling them why they’re being ignored is almost as important as ignoring them. It helps explain my motivations and it prevents them from having any stupid misrepresentations of my silence. I’ve ignored them for years, and to help explain why, this hopefully gives a definite answer.

Last October 27. 2012, the eighth Philippine Comics Convention or Komikon was held at the Bayanihan Center in Pasig. EIGHTH you say? You bet! But isn’t Pinoy Komiks dead? Breaking news, son. It never died!

Let me take you back some two decades ago to 1993. The once giant Philippine comics industry was on the wane, with decades old komiks companies closing their doors to publishing comics one by one. But at the same time, something strange was happening. Without any venues to showcase their work, talented young comic book fans started creating their own comic books. They photocopied the pages, stapled them together, and sold the comics themselves. Some even went further by actually going to the printing press and have multiple copies printed. Where did they get the money? Most likely some of them had jobs, some of them probably saved up for it, and some probably borrowed money from their parents. Whatever the case, what resulted was the birth of a unique Filipino independent comics industry driven by young people who created, distributed and sold their own comic books.

Even as early as 1994, comics shows were already beginning to be held starting with a mini convention held at the Robinson’s Galleria where enthusiastic comics creators like Budjette Tan, Arnold Arre, David Hontiveros, Gilbert Monsanto, myself and many more gathered for the first time. It began an explosion of self published comic books of all kinds: Comics 101, Exodus, Wasted, P-Noize, Shadow, Memento Mori, Flashpoint, Archon, Dhahmpyr, Indigo Valley, Scions, Tatooed, Pagan Press, Angel Ace, and so many more.

There were quite a few shows that followed there and at other malls, each event growing bigger than the last. 2003 saw the very first San Pablo City Comics Festival organized by the Komikero Artists Group, which signalled the growth of such events outside of Metro Manila.

In 2005, a group of particularly dedicated comic book fans and creators called The Artists’ Den decided to organize the first Komikon and hold it at the University of the Philippines, Bahay ng Alumni. Within a few years, the venue had become too small to accommodate the growing number of comics creators and fans. The event moved several times from Star Mall in Mandaluyong, to the Megatrade Hall in Megamall, and eventually to their current home, the Bayanihan Center in Pasig.

Komikon is now held twice a year, once in the summer called “Summer Komikon”, and the main Komikon held around the end of the year.

That the growth of Komikon and that of the independent comics industry go hand in hand is worth taking time to consider. Most of these creators create, sell and distribute their own comics. With no huge distribution arm at their disposal, they sell their comics at every place they are capable of reaching. They can sell at the various comic book stores across Manila including Comic Odyssey which has always been supportive of local comics, and of course, they take full advantage of the local comic book conventions, wherever and whenever they are held.

Big publishers have noted the success of this growing industry and have taken it upon themselves to select some of the more popular and successful titles and publish them, affording the comic books a larger audience than what they would normally achieve.

Adarna has taken on Arnold Arre’s works and have published After Eden, Visprint has published both Budjette Tan and Kajo Baldisimo’s Trese as well as Carlo Vergara’s collected edition of ZsaZsa Zaturnnah, and National Bookstore has published Skyworld by Mervin Ignacio and Ian Sta, Maria, as well as Elmer, 2nd Edition by yours truly.

With the big publishers getting into the act, it necessitated the a third spinoff convention of the Komikon called the “Indieket”, which emphasizes and showcases the very roots of the independent comics industry, the self published comic book makers who photocopy and print their own comics. That the Komikon has held such a spinoff event shows how they staunchly want to stay true to their roots, but at the same time being open to growth and maturity. While these small groups are still a very big part of the main conventions, I think that it’s only fitting and right that they have a show all their own.

At the Komikon last October, more new and better comic books were released by an even younger generation of creators as the venue struggled to accommodate the sheer number of people in attendance.

Across the country even more comics conventions are being held. There have been conventions held in Baguio, Bikol, Cebu, San Pablo City, Los Baños, and this year sees the very first Iloilo Comics Convention in December. In January next year there’s possibly another one in General Santos City.

Pinoy komiks is dead? You must be crazy!
Posted by Gerry Alanguilan at 5:37 AM No comments: 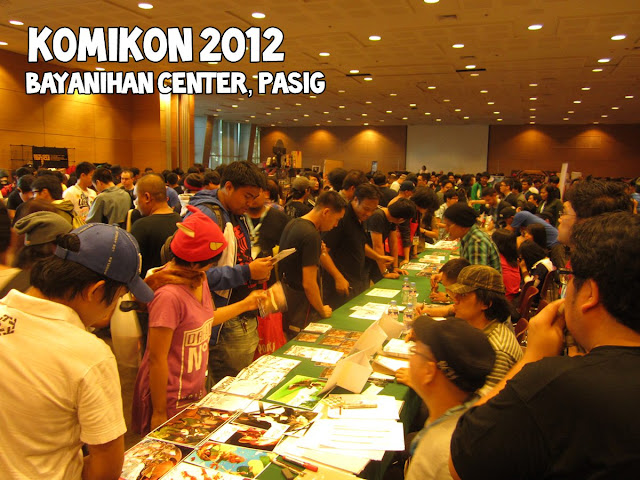