I rarely go to Manila anymore because I can't stand the heat and I can't stand the traffic. I made an exception today because it's a holiday (Jose Rizal day) and my girlfriend did not have work so we took this opportunity to go on a trip to Manila and visit Luneta, SM Manila, Chinatown and Quiapo. Yeah, yeah, LUNETA. We took the LRT from Buendia to Luneta. And it was great, really. We had a nice time of it. We even had time in the afternoon to go to Robinson's Malate where I finally got a copy of ELEKTRA: ASSASSIN Trade Paperback by Frank Miller and Bill Sienkiewicz.

We got on the bus to go back home at around 6pm, and the TV was on Channel 2, showing Magandang Gabi Bayan with Noli De Castro. Only then did we know all the things that happened in Manila that day. A bomb exploded in an LRT coach killing 9 people. Several bombs exploded in the city at the same time, killing and injuring even more people, including a cop who was trying to defuse one of the bombs.

I fell silent and limp as I watched the news. I saw bloodied and mangled bodies on the floor of the LRT coach. I saw one man whose feet had been torn off being carried away in a stretcher. My knees grew weak when I realized that it could have been me and my girlfriend lying there mangled and dismembered in that LRT coach had we been a couple of hours late. I felt so sad when I thought of all the victims and the friends and family they will be leaving behind. I was really so overcome by emotion that at some point in that ride home I just cried.

And I felt anger too. Extreme anger. And hate. Hatred for all those responsible for this atrocity. Hatred for every single one of them. If I knew who they were, you can give me a gun now and I will NOT hesitate to shoot them down. Death is a fate these people deserve, no less. But I think it's better to let them die after several days of torture. You think I'm wrong? You think I'm no better than them? Well screw you and what you think! You are NOT me. If by doing this sends me to Hell as well, then by God, I do not care. Let me go to Hell, as long as I drag these bastards down there along with me.
Posted by Gerry Alanguilan at 9:40 PM No comments:

I finished a Cast drawing here: 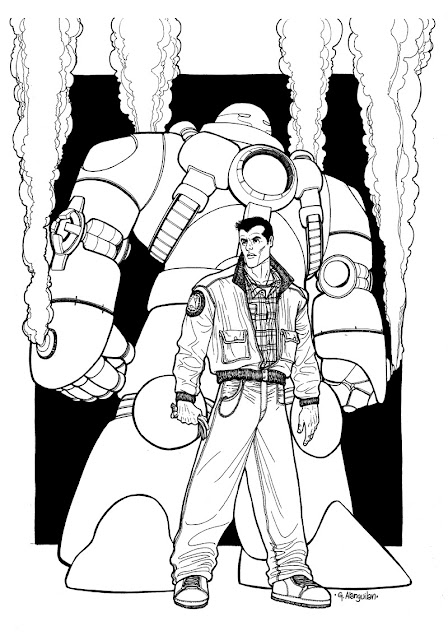 What's it for? Nuthin really. Just playing around with this way of drawing. It's actually tougher than I thought.
Posted by Gerry Alanguilan at 9:44 PM No comments:

Email ThisBlogThis!Share to TwitterShare to FacebookShare to Pinterest
Labels: art

Yes! The sun finally showed itself early today. Too bad it had to rain later, but still, it's probably the most glorious thing I've seen after all that beastly rain. And tonight the sky is filled with so many stars. Spent a lot of time just lying back and looking at everything. Early in the evening you can see 3 planets at once. The brightest object in the sky after the Sun and Moon, Venus, can be seen in the west. On the opposite side in the east you can see both Jupiter and Mars hanging around very near Pleides and Taurus. I was wondering just when I'll be able to spot that Space Station.

Gonna be picking up my GF from work tomorrow, go around Festival Mall and go home here to San Pablo again. I'll be finishing that Cast Iron drawing tonight and I'll be posting it here very soon.
Posted by Gerry Alanguilan at 9:46 PM No comments:

Hot damn its still raining like crazy. In Christmas time too! I believe it's the very first time it was ever this rainy on Christmas here. 2 years ago it rained a lot too and it depressed me so bad. Christmas was not supposed to be like that. Sad to say, this is the first year in my life when I didn't feel as Christmasy as I used to. There are times I've been such a grinch, such a Scrooge and I didn't like it. There were many people who lost their jobs at this time of year, myself included. I'm not too worried though. I've been jobless before and I've always bounced back. I'm more worried about just what the hell is going on with the weather. It's all screwed up the world over. And just this morning I heard from the TV that a 50-meter asteroid nearly hit us last night. And nobody saw it coming.

Things aren't so bleak, I think. I mean, I'm still here. I can still draw, I can still write. I still have all my senses. I guess all I need to concentrate on just living, instead of worrying about things that are beyond my control. Just keep on drawing. I'm currently drawing studies for a comic proposal called CAST IRON, which is my personal idea of Iron Man. Once I get something done, I'll post it here.

Finally caught that damned rat. I was gonna buy traps today, but my mom scattered poison inside the house last night and this morning, the thing winds up dead right on our kitchen sink. Good riddance. That thing was a real pest. He gnawed on slippers, broke in on anything that contained food, hid rags, and started nibbling on our windows. What a monster.
Posted by Gerry Alanguilan at 9:47 PM No comments:

Well, it's Christmas morning now. 8:30 something. But believe it or not, I woke up at 6. I don't feel like eating because I probably ate too much at last night's Noche Buena. Man, that Excellente Ham is excellent!! Everyone ought to try it out. I wanted to bake some chicken last night but was frustrated when our oven won't light. I'm so paranoid when I'm lighting our oven because I'm always afraid that the thing will blow up on me. When the thing still did not light after wasting a whole box of matches, I decided to look in the back and much to my horror, I saw that gas hose had been gnawed through by a rat. That damn rat. It's been such a pest for the past couple of weeks. This means war. As soon as I'm able, I'll be buying a couple of rat traps and I'm gonna be doing some killing this fine Christmas season.
Posted by Gerry Alanguilan at 9:49 PM No comments:

I have sent out Christmas greetings to many of my friends who have Hotmail accounts. However, everyone of them bounced back to me for some reason or another. Guys....get rid of that Hotmail account! Get Yahoo. It's a hundred times more dependable. So, Merry Christmas to you,
Jason Maranto
Carrie McNinch
Angela Paman
Morgan Parducci
Jonas Diego
Jenie Aesquivel and
Dulce Ocampo

Hope you have a great holiday season! I had hoped to write you myself and extend my personal greetings to you on this once in a year occasion, but Hotmail prevented me. :) Take care of your fingers on New Years now.
Posted by Gerry Alanguilan at 9:50 PM No comments: