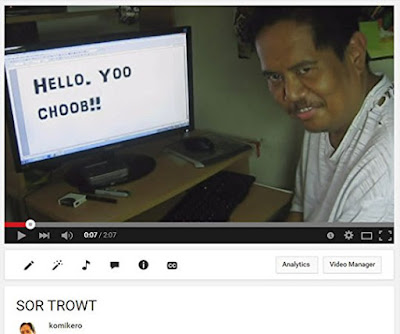 It’s been months since I made a video on You Tube. One or two people have missed me and asked on Twitter why I don’t upload new ones. I’ve thought about that. In the past couple of years I have attempted to restart vlogging and you can see my efforts up at my You Tube channel. I made videos saying “It’s been a while since I’ve made videos”, after which I’d say why and they all involve me being busy with this or that.

To date I’ve uploaded six hundred and fourteen videos, counting a few that are private. When I realized how much videos I’ve done, I’m surprised. 614. Holy Shit. Where did I find the time?

I realize now that my burst of You Tube activity coincided with my hiatus from inking for Marvel/DC. I had quit inking in 2005 and soon after I was doing these videos on You Tube with seemingly crazy abandon. It also coincided with the time I got my first digicam and I was giddy with the thought that I could make my own little films. It was something I dreamed about when I was younger. I really enjoyed making these little videos. I particularly enjoyed editing it all together. I think this is one of the videos that I enjoyed editing the most:

But by far the most notorious video of mine is THIS one:

Right now it’s up to 5.8 million views. That’s kind of crazy. All of a sudden I’m seeing this video on TV on shows both here in the Philippines and abroad. The Japanese got a little excited about it which led to this:

And there are lots more! I’ve gotten offers to appear at commercials and things like that. I’ve always declined because I don’t know… I feel that it’s just not my thing.

I wouldn’t say it changed my life, but it has been quite an interesting experience. I do get recognized once in a while, but not as often as you would expect. Earlier today a tricycle driver recognized me and asked how my comics work was going and I said it was just going fine. I didn’t know the guy. I don’t think I’ve met him. But I keep wondering if I have. I don’t know. I guess when people recognize me, I always assume it’s someone I’ve already met before.

In those days I was active at You Tube I would get all these ideas for videos. I guess that’s why I kept making them. My most favorite video of mine is this one, from August 2008:

I had this rough idea for a topic. All I did was switch on the camera and just started talking. I didn’t have a script. It was just stream of consciousness stuff. I think it came out pretty well. To this day I had no idea how I did it. I seriously doubt I can come up with something like this now.

When I started working for Marvel again in 2009, I continued to make videos, but the enthusiasm for it became less and less. I don’t think I’ve made any videos at all this year and it’s already August. I guess you can say I’m pretty much retired from it. It wasn’t a conscious decision to quit. It just happened. I think it’s got to be like falling out of love with someone. You probably wouldn’t want it to happen, but it does. And you just don’t know why.

I remain grateful to all those who have followed my videos, watched and left comments. I’ve met a lot of people through it with whom I remain on friendly terms to this day. It was a great experience and although I’ve made a damned fool of myself in a lot of those videos, I regret nothing. It was fun.
Posted by Gerry Alanguilan at 4:21 PM

Email ThisBlogThis!Share to TwitterShare to FacebookShare to Pinterest
Labels: video, viral, you tube