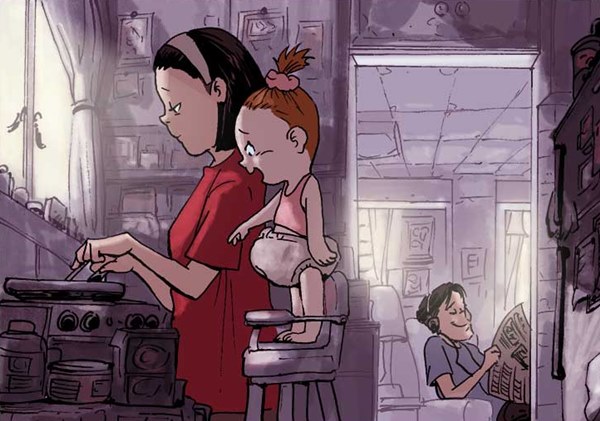 After almost a year, I finally finished the script to my next book, “Rodski Patotski: Ang Dalagang Baby”! Like a lot of my projects I felt good about, the writing of the story took a long time to do. After a lot of stops and starts, I’ve finally come to the point that I’m very happy with what I’ve written, and I feel good about handing it to the artist, which by extreme luck is none other than superstar artist Arnold Arre.

Arnold is drawing the book as well as coloring it. I’ve written it, and I’ll take care of lettering and laying out the book. Reading it through and looking at the art that Arnold has done so far, not only do I feel good about it, I feel very good about it. Arnold is such an extraordinarily amazing artist. He was able to elevate my story into something very special.

It really began when I discovered an old komiks story called “Linda Maligna” illustrated by my father in law, Rudy Florese. Linda is, amusingly enough, the name of his wife, my wife’s mother and my mother in law. I thought it cute that my father in law worked on a story named after his wife. I thought I’d continue the tradition and name my next story after my own wife.

“Rodsky” is a name my wife is known for in school by her classmates and friends, which is short for “Roddielyn”. So I named my character Roddelyn, or “Rodski” for short.

And now what idea or concept do I wrap around that name? I thought I’d make it a tribute to all the classic Pinoy komiks characters. I decided to call it “Rodski Patotski: Ang Dalagang Baby”. As to why she’s called that, I guess I won’t spoil it for you. You would just have to pick up the book when it comes out.

The book is written in a combination of English and Tagalog. It was an experiment I wanted to try out. I wanted to see if I could write it that way, but still make it understandable to a non-Tagalog reader. Hopefully I pulled it off. HOPEFULLY!

A lot of people may be asking…. “What happened to DARNA LIVES?”

That’s a good question. Arnold and I enjoyed creating that short Darna story, but I’m afraid that’s only as far as it would go. I just wanted to show a different direction that such a long standing character can taken and still make it work. A lot of these classic characters come with stories that seem to be afraid to push the boundaries of the character and of the genre. Arnold and I demonstrated that it can be done and still be well received. Hopefully, future Darna writers would pick up on that.

When writing my own stories, I now prefer to just create my own characters and create my own legacy, instead of perpetuating the legacy of other people.

So is “Rodski” any good? I really don’t know. But I feel good about it. Hopefully, people do get to enjoy reading it. It’s written with “all ages” in mind so it can be read by young children and grandparents alike. It’s pretty much a first for me, having written so many “For Mature Readers Only” material.

I can’t wait for this book to be finished and printed and in your hands! We’re targeting Summer Komikon for it, so fingers crossed! The book will have 100 pages and square proportions. It will be square bound, and in full color. Yep! FULL COLOR! Lord knows where I’ll get the money to pay for printing this, but I’ll find a way!
Posted by Gerry Alanguilan at 7:02 AM