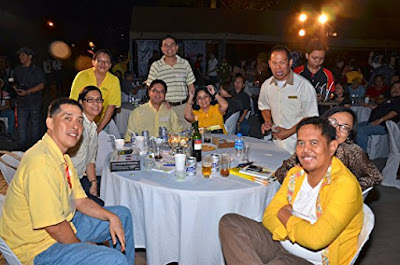 My classamtes with a photobombing waiter. Photo by Ariel Porca.

The homecoming at my old university UST went surprisingly well. That’s probably because we had a big bunch of my classmates there and it was really nice seeing a lot of these faces again after so long. Granted, I’ve seen most of them on Facebook, but it’s different when you see them face to face.

At the start of the day Ilyn and I passed by Robinson’s Galleria first for a visit to Comic Odyssey, where I picked up “Marvel Firsts: The 80s Vol 1″. I’ve been collecting these Marvel Firsts books beginning with their 60s volume and I’m really loving them. Sure they only feature first issues (which is the novelty of it), but as you read the stories you realize a lot of these stories are left hanging because they continue on to 2nd issues (which of course aren’t included in these books). I really like them nonetheless.

We had lunch somewhere and I made a mistake of ordering a shake. In the picture in the menu it didn’t look like a shake. It looked like tea with juice or something. But it was a shake. As soon as I drank it I realized my mistake. Why is it a mistake? I’m lactose intolerant. And you know what that means. I can’t afford to have a bad stomach, not with so many activities. We still had homecoming that night! I didn’t finish the shake anymore and just asked for water.

After lunch I then dropped off Ilyn at UP Diliman for her symposium and while she did that I went to Trinoma to meet a friend. That’s when I started to feel disturbing rumblings in my stomach. And I’m like HOLY SHIT. It wasn’t so bad though. It’s just that my intestines were producing so much air it was just annoying. To me and people around me I guess. But I’m not admitting anything.

At 5pm I picked Ilyn up at UP and we went off to UST. Thankfully, my brother lives just beside UST so I managed to get a much welcome bathroom break. I was able to go to the homecoming stress free.

There were lots of prizes up for raffle including almost TEN flat screen TVs. I was hoping to get one because I don’t have a TV here at home. But I was just unlucky. Oh well. Nevertheless, it was great meeting up with old classmates and reminisce. One classmate set me aside and told me she knew of another really talented guy who draws comics. She’s a neighbor of his and they often get to talk when they meet at gym. Apparently, she was talking about Leinil Yu.

Speaking of Leinil Yu, the two page spreads that arrived for an Avengers issue we’re doing are just spectacular and I’ll be spending the whole day today just working on them. So yeah, until next time!
Posted by Gerry Alanguilan at 6:48 AM

Email ThisBlogThis!Share to TwitterShare to FacebookShare to Pinterest
Labels: UST