On Inking, Bold Stars and Rodski

I’ve been inking comics professionally now for like well, since 1995. You would think I’d get tired of it, bit I’m honestly not. Admittedly, there was a time that I quit. This was back in 2005. That was not because I didn’t like to ink anymore, but because I wanted to expand my creativity to other things. In that break I did things like Humanis Rex, Timawa, and most specially ELMER. I’m really proud of Elmer. I still can’t believe I actually did that, and I still can’t believe all the doors that thing opened.

I’m back to inking but now I’ve made an extra effort to continue doing my own stuff. That’s why there’s “Where Bold Stars Go To Die” and there’s “Rodski Patotski: Ang Dalagang Baby”. It’s been very difficult juggling inking and the other things, but I can’t help it now. I just have to do it.

Speaking of “Bold Stars”, it was picked up by SLG Publishing, the same publishing company that published ELMER internationally. It can now be ordered here. If your local comics store ordered this when it was previewed in the Diamond Catalog last October, then your store will most likely have copies.

Arnold Arre continues to send in finished pages of “Rodski”, and he’s blowing my mind with each page. Maaaaaan. I’m really pleased how the art’s turning out. Arnold made a Rodski poster specially for Summer Komikon so be on the look out for that when Komikon starts to promote the event. That will be on April 12 by the way. So save the date! We will be launching the book right there and yes, Arnold will be on hand to sign books.

Both Arnold and Leinil Yu will be special guests at Summer Komikon, and they intend on positioning me right between them at the venue. I think it describes my position in the industry quite well. One foot in independent Filipino comics and another foot in American comics. I think it’s a great place to be in.

Speaking of inking, I rediscovered this piece online: 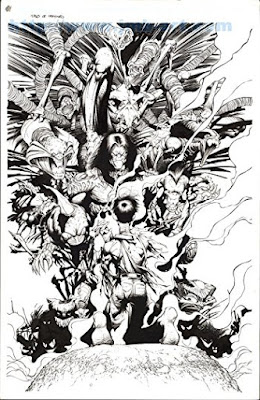 It’s unsigned, but it’s pencilled by Whilce Portacio and inked by me, sometime in 1998. This was a cover for Darkness, I think, for TOP COW. I still remember exactly the circumstances in which this was inked. The studio in Manila was located somewhere in Horseshoe Drive, QC. At the time I was no longer staying full time at the studio. After training with Whilce since 1995, he had let me go to stay and work from home. I dropped by that day for a visit. Whilce was working on this cover and he asked me to ink it. But I had to work on it at the studio because the deadline was tight. I thought that would be OK. At the time I think Edgar Tadeo was still staying at the studio, as well as Gilbert Monsanto. I didn’t have my tools with me so I went to nearby Cubao to buy a Rotring Technical 0.1. That’s the tool I used to ink most of this cover, plus maybe a quill or brush I must have borrowed from Edgar. I ended up staying overnight.
Posted by Gerry Alanguilan at 6:33 AM