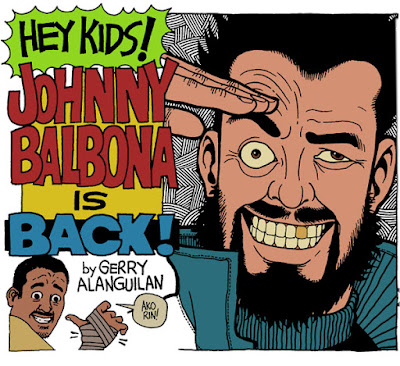 Johnny Balbona goes online! Johnny Balbona is someone I created early in the 2000s for Mango Comics humor publication "Mwahaha!".

Johnny is someone I based, at least visually, on my old late great pal, Johnny Danganan, who is nothing like Johnny in real life except for the er... inhuman amount of hair on his body.

Johnny Balbona ran for several issues on Mwahaha! until the magazine was discontinued. There's more life in Johnny so I decided to color them (Johnny's original adventures were in black and white), and upload them one strip at a time, on this website.
The first story I'm uploading is probably from Mwahaha's 5th or 6th issue, which featured Johnny as the superhero "The Repudiator" which is my take on the Punisher. Click on the "Web Comics" button at the top to get reading!
Posted by Gerry Alanguilan at 1:51 PM