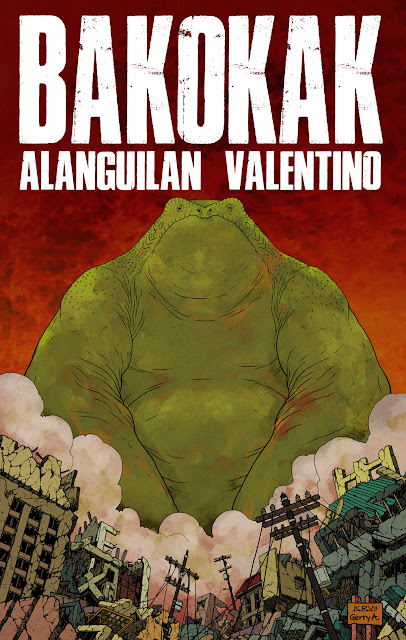 I remember watching our old black and white TV back when I was really young. I was, I don't know, maybe 7 or 8 years old? It was playing an old Filipino movie featuring a super-heroine called "Supergirl". It was only later that I learned this character was a knock off of the DC super-heroine of the same name. Anyway, this local Supergirl was played by actress Pinky Montilla. I thought she was so pretty that I kind of fell in love with her a little bit.

The movie also featured a giant frog that devastates a local town. It was actually my first exposure to Big Monster movies, long before I saw Godzilla. I was hooked. The unbelievable spectacle of a giant creature terrorizing and destroying the countryside just blew my mind. I became a big fan of giant things destroying towns. I saw other movies in the same vein like "Kronos" a giant robot from space with something like a piston hammering the earth as it moved. There's King Kong from 1976. I thought that was terrific. Of course it also had young Jessica Lange, who I also kind of fell in love with a little bit.

Years later, comic book writer/artist, actor, playright Carlo Vergara showed me preview pages of his upcoming book "Zsa Zsa Zaturnnah", which featured a giant frog terrorizing the countryside. I laughed. I thought it was so awesome. It revived an interest in all things huge monsters.

Years later I decided to go ahead and do my own giant creature story. I chose a frog because of course! Set in present day, this is my version of what a giant creature could do in modern day Manila.

I decided to work with artist Kevin Ray Valentino. For my past few books I've had other artists draw my stories because I simply didn't have the time to draw them myself. In all cases, I found that collaborating with other artists is quite rewarding because they always, always do a much better job than I could have.

I chose Kevin because I saw great potential in his work. I have to say he does an excellent job and I have no regrets asking him to draw this.

BAKOKAK will be available at Komikon 2017, November 11-12 at the Bayanihan Center in Pasig. Bakokak is 84 pages including covers. B&W interiors and colored covers. It will retail for a special Komikon price of P199. After which it will be sold at places like Comic Odyssey and through me directly for P200. Sorry. I just find Komikon a perfectly good place to dispose of a large and heavy basket of 1 peso coins!

Cover art above is pencilled by Kevin Ray Valentino and inked/colored by me. Those colors are temporary though. I just did this quickly for promo purposes. Final cover will be recolored.
Posted by Gerry Alanguilan at 8:32 PM