Because PLDT has been screwy for the past couple of weeks, specially after that crazy April 28 thunderstorm, my Internet has been mostly down. I had wanted to update this blog earlier, but it was just not possible. We’ve been pretty insistent on calling repair early on and PLDT has visited us twice to check things, but this seems to be a problem that they have extreme difficulty solving. 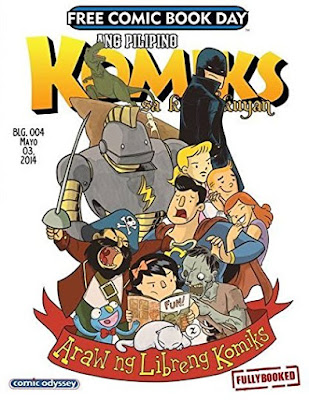 Well, whatever. As long as this interruption of service reflects on our phone bill, I won’t freak out too much. I did freak out early on, but I just got tired of it.

It was Free Comic Book Day last May 3. I never got a chance to talk about it. It’s a special FCBD for me because I was this year’s editor of Comic Odyssey’s free comic book giveaway. I had proposed to have it magazine sized with interviews and comics.

Awesome cover by Elbert Or, right? :)

I was able to bring on board guys like Whilce Portacio, Jay Anacleto, Leinil Yu, and Mark Torres to contribute pinups. But a lot of the actual work was by my team of Andrew Villar and Jon Zamar, who did the nitty gritty of putting together the comics and layout the entire thing. I came up with the interview articles.

I do this because I’ve pretty much committed to FCBD with Comic Odyssey in perpetuity several years ago. It’s when I give back to the best comic book store and comic book shop owner I’ve had the pleasure to visit and meet. Sandy Sansolis of Comic Odyssey is so passionate about comics and sharing comics that I want him to be successful in his business. The more successful he is, the better it is for us comic book fans here in the Philippines.

Posted by Gerry Alanguilan at 9:40 PM