Vibal Foundation, in cooperation with the Francisco V. Coching family, will be coming out with its second collection of classic works by Coching, namely, "Ang Barbaro", and will have a launching on February 8, 2017 at Fully Booked, BGC, Pasig.

I remember when I first approached the Coching family about doing the first of such collections. I had chosen "El Indio" (which Vibal eventually published). Mrs. Luming Coching had wanted me to do "Ang Barbaro" first because Barbaro is in fact, the first part of a two-book story, El Indio being only the sequel.

But I had my heart set on El Indio because I felt it represented the peak of Coching's artistic powers (a peak that never faded, in fact, and continued well past his retirement). In Barbaro, he was still developing his craft. I felt the drawings in El Indio were much more solid, much more well defined and confident, and it contained illustrations that were just spectacular.

El Indio eventually came out in 2009 and Vibal, as well as the Coching family, wanted to continue coming out with these books, Barbaro being the one they wanted. But by 2009 I had realized how time consuming it was to restore such a book. It took me and Zara Macandili around 4 years to digitally restore El Indio. Barbaro was a much thicker book and will definitely take much longer. I had returned to inking for Marvel by then and was too busy to take on such a challenging project. I had to decline.

Years later, the Coching family found a way to collect further volumes in a format very much like the Vibal collection including stories like Lapu-Lapu, Dumagit, Taga sa Bato, Condenado, and even their own version of Ang Barbaro. I thought it was amazing. I visited their booths at komiks events and bought as much of these books as I can. The Coching family editions are far more limited, I'm sure, than the Vibal ones, and print runs are painfully small. 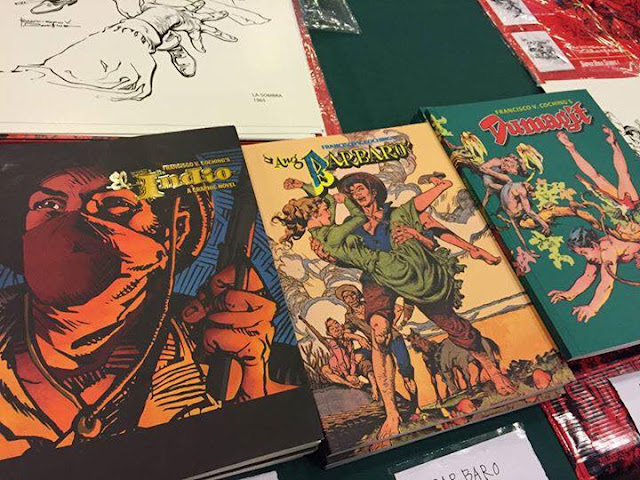 And now Vibal has come up again and decided to do their own collection of "Ang Barbaro". I really wish I could go to this launching. Any new book collecting works by Coching is always a cause for celebration.

But having just come from a long illness which I'm still recovering from, and having been advised by my doctors to avoid crowds for the meantime due to my lowered immune system, there's no way I'll be able to attend this launch next week.  I'll be sure to have a copy reserved for me though! I think this is very exciting!

Posted by Gerry Alanguilan at 2:53 AM